Laser welding is not something that many metal fabricators think about because, honestly, they don’t come across it that often. Welding lasers can be found in a variety of manufacturing facilities across the globe, but they are not as ubiquitous as the press brake, for instance. 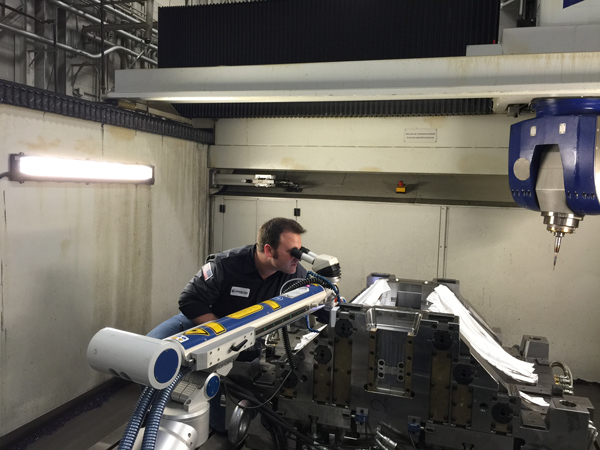 Alpha Laser US laser welding units can be moved to where the arm can reach its welding position, even in deep or complex molds.

Alpha Laser US believes that could change with laser welding technology that is flexible enough for shops that value the ability to get new jobs up and running quickly. These laser welding units also are more affordable than the high-powered units that are commonly found in car assembly plants. Wes Wheeler is the sales manager for Alpha Laser US. He also happens to be the sales manager for Phoenix Laser Solutions, a company that uses pulsed laser welding technology to repair tooling of all kinds, from plastic injection to stamping. It has four locations: Cuyahoga Falls, Ohio; Blue Springs, Mo.; Brookville, Ind.; and its headquarters in Meadville, Pa., which at one time many considered to be the plastic injection molding capital of North America. Phoenix Laser Solutions uses the German-made Alpha Laser equipment, typically Nd:YAG lasers of at least 300 W. (Nd:YAG lasers get their name from the crystal of neodymium-doped yttrium aluminum garnet that is used as the lasing medium.) In recent years Phoenix set up a sister company to sell and service Alpha Laser products in the U.S.

“We just opened a shop in Indiana, and a lot of people in that area have never heard of laser welding, which surprised me a bit. But it kind of makes sense because there’s not a lot of people doing it around there,” Wheeler said. “So there are segments of the U.S. where everyone knows about it, and other areas where people need to learn about it. It’s definitely a chance to grow the technology.”

The Portability of Laser Welding

Phoenix uses the Nd:YAG pulsed lasers, ranging in power from 300 to 500 W, for repairing tooling. The Nd:YAG laser is better suited for this type of work because it generates enough peak power to provide a nice melt of the filler metal and minimize dilution around the weld pool, Wheeler said. (Alpha Laser US machines can use up to 0.040-in. welding wire, but traditionally are more efficient and faster when using wire that is 0.020 in. thick.) The Nd:YAG laser also doesn’t overpenetrate the base metal when the welding process begins.

This type of laser is particularly useful for repairing tooling used for something like rubber moldmaking. These molds obviously can’t have any inconsistencies in the tooling surface because it could damage the rubber component being created.
Alpha Laser US also has laser welding units powered by fiber laser technology, which relies on YAG-doped fiber optics to generate the laser. The fiber lasers can provide more penetration and are useful as a replacement in applications where gas tungsten arc welding (GTAW) is typically used.

Many metal fabricators are familiar with the reliability of fiber laser power sources, in which modules can be replaced quickly with little worry of extended downtime. Wheeler said that the Nd:YAG lasers ultimately have some degradation of the flash lamp over time, and at that point more energy is needed to deliver the same amount of power that the unit was originally designed to deliver. He also noted that fiber laser technology costs more than Nd: YAG technology.

Of course, the welding application determines what laser power source makes the most sense. It also determines whether the technology needs to be mobile. That’s where Alpha Laser US stands out.

Its ALFlak laser welding unit sits on traction belts and can be moved to where the arm can reach its welding position, even in deep or complex molds. Welding seams up to 500 mm are possible without relocation of the workpiece to be welded, which can be a valuable time-saver.

Your advantage: The laser welding process can be performed without constant repositioning.

Wheeler recounted a recent demonstration the company did for a major automotive manufacturer. It was able to load the ALFlak unit onto a van, drive to the plant, unload the laser welding unit, maneuver it about three-quarters of a mile to the tooling area of the plant, demonstrate the technology, exit the plant, and drive back over the course of a few hours. Of that time, only about 15 minutes were needed to get the power source up and welding.

Wheeler said that at one time tooling repair represented about 95 percent of Phoenix’s laser welding work. Today that percentage has decreased as manufacturers discover more applications where laser welding might make sense.

As an example, he described a scenario in which a stainless steel container for the medical industry was fabricated using laser welding instead of GTAW. With a fiber laser welding device, the manufacturer gets full-penetration welds with less heat distortion. (The laser pulses release high energy, but in a very short time period, allowing the laser to melt the metals without infusing more energy than it needs to into the workpiece.)

In a nod to the flexibility needed in modern manu-facturing settings, Alpha Laser US lasers also can be used in automated applications.

“The unit has programming software and can quickly be set up to process a welding job that involves several pieces. Then you can jump from the production process back to a manual process if needed.”