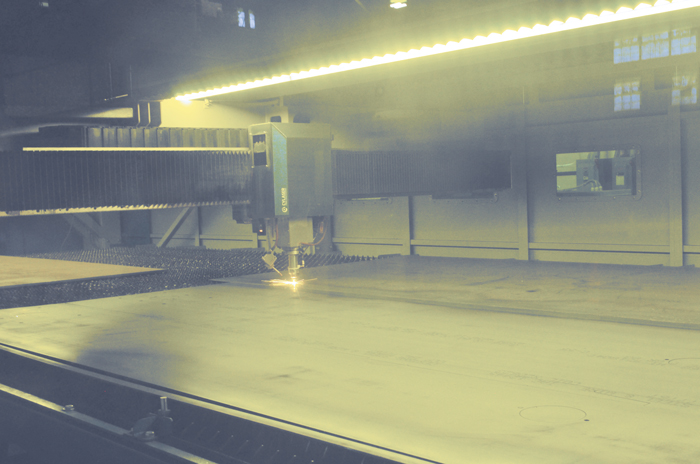 Nestled on the city’s southwest side, Chicago Metal Fabricators has been at work for more than 100 years. But even at this age it has shown a willingness to adopt the latest technology—most recently one of the largest fiber laser cutting machines in the U.S.

If you were traveling in the fabricator’s neighborhood, which it shares with Chicago-style bungalows and other single-family homes, you might be surprised by the size of the fabricator’s facility. It covers 200,000 square feet, about half of a city block. Since its founding in 1908, the building has expanded one room at a time. Brick-walled rooms give way to other brick-walled rooms until you get to larger bays in the back of the facility.

In the early 20th century, Chicago Metal Fabricators fabricated metal cabinets and duct-work, using presses that were powered by line shaft pulleys and flywheels attached near the ceiling; in fact, a few still occupy the same spots they did almost a century ago, a nod to the company’s manufacturing past. Today it specializes in heavy components and large assemblies from 16 gauge up to 3-inch plate. Up to 300 jobs can be open on the shop floor at any one time.

“We have areas for the big, heavy fabrications,” said Randy Hauser, president of Chicago Metal Fabricators. “Obviously, as a metal fabricator you’d like to have long bays, but we don’t really. We have the large bay areas in the back, but what we do have are a lot of large rooms. So we use the rooms to be a little more cellular.

“For example, we do our stainless fabrication in isolated rooms to stay away from carbon contamination. Then we do a lot of light-gauge work and assembly in some of the other rooms,” he continued. “We cellularize our work that way. It’s taking advantage of the situation we have.”

As the type of fabrication work has evolved over the years, so has the customer base. Chicago Metal Fabricators now provides metal parts to the aerospace, airline ground support, construction, railroad, and water treatment industries. Some of the work is very elaborate, such as a 12-ton aerospace component made of 6-in. A514 steel that required complex thermal control and magnetic particle inspection on every weld pass after a 24-hour hold period. The days of fabricating simple ductwork at the southwest side facility are gone.

Hauser said that while these large, complex fabrications and weldments make up a large percentage of the company’s business, it still does quite a bit of sheet metal work. He estimated that it still accounts for about a third of overall business.

That’s why new laser cutting capabilities were so important for the company as it looked for future opportunities.

Chicago Metal Fabricators jumped into laser cutting in 2003. It purchased a 6-kW CO2 laser cutting machine with a 10- by 20-foot cutting bed.

“What we liked about it is that it could handle bigger, heavier plate, but we also have a fair amount of sheet metal,” Hauser said. 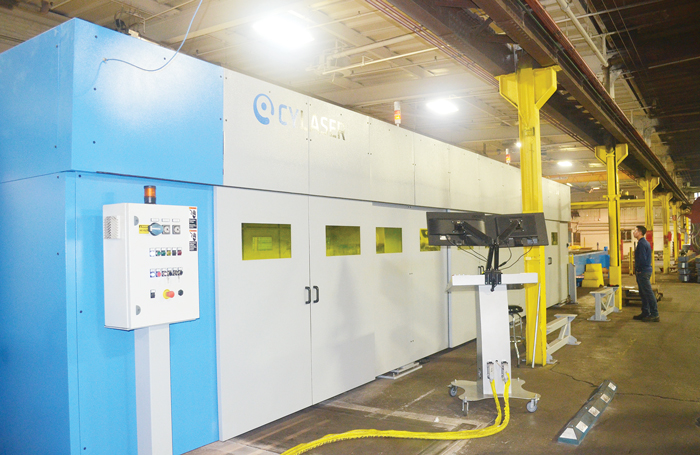 The fabricator has been religious about maintenance, so the CO2 laser is still able to deliver quality cut parts. But it takes quite a bit of knowledge to ensure the laser is cutting correctly to meet quality specifications. Also, routine beam path maintenance does require the machine to be offline for extended periods of time as well.

Hauser said he had been keeping an eye on fiber laser cutting technology over several years, but he wanted to pursue the technology only once it had been proven out. In the meantime, he had gotten positive feedback from trusted sources, and he had seen how cutting head design had evolved to allow fiber lasers to cut even thicker metals than earlier generations of the technology could handle.

Additionally, he wanted to find a manufacturer that would be open to building a custom cutting table that was 10 by 30 ft. The largest standard table is about 6 by 26 ft., but Chicago Metal Fabricators has two 30-ft.-long press brakes, the largest of which provides 1,500 tons of bending force.

“Why buy a 26-ft. laser, because you know the next order we get is going to be for a 27-ft. part,” Hauser said, acknowledging the company actually had some 27-ft. parts on the shop floor that day.

As the search for a fiber laser became more serious, a machine tool salesman recommended that Hauser look at CYLASER. After learning about the company’s long-term connection to fiber laser technology and its experience in building large cutting machines, Hauser knew he had found a new technology provider.

How the Laser Works

CYLASER was a manufacturer of custom welding machines before it jumped into the world of metal cutting. It is located close to the Italian manufacturing plant of IPG Photonics, a major supplier of fiber laser power sources to the world’s machine tool builders. This proximity prompted the two companies to develop a strong technical relationship over the years, according to company officials.

In the early 2000s IPG was beginning to offer high-powered fiber lasers aimed at the welding market. It offered a generator to CYLASER to try, and that enamored the company’s product developers. Soon after, CYLASER purchased its own fiber laser power source and began using it for metal cutting applications.

Because fiber lasers don’t require a path of mirrors to be fed along the conventional gantry bridge, CYLASER was free to come up with another way to move the laser cutting head. It’s airplane structure design mimics an airplane wing, on which the main support structure runs down the middle of the wing. In the laser cutting machine design, the X axis consists of an overhead steel structure, which has been stress-relieved and precision-machined. It runs down the middle of the cutting chamber. The steel structure also houses the rack-and-pinion and precision guide systems. Beneath the X axis, the Y axis is connected through four precision bearing packs. This configuration is designed to limit any flexion for the Y axis. The Z axis and the cutting head are mounted on the Y axis.

Hauser said that large-format gantry designs over a 10-ft.-wide table carry a fair amount of inertia with them. 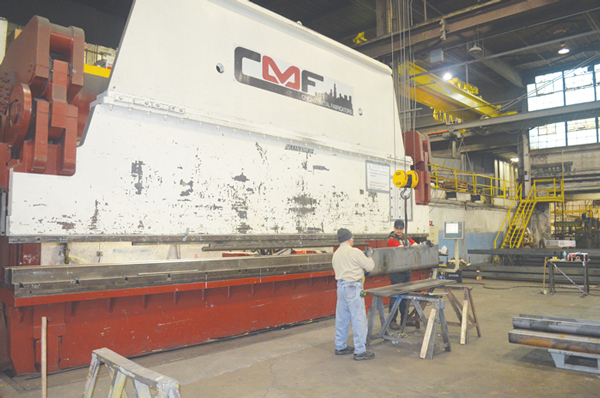 “I’m just not a big fan of large gantries for sheet metal when you’re cutting at high speeds and working on small features,” he said.

Chicago Metal Fabricators got its 8-kW fiber laser cutting machine in December 2018. It has a dual pallet changer, so that an operator can remove parts from the previous skeleton and load the next blank while the machine is working on another job. The operator also can access the laser from the side should he want quick access, such as throwing a remnant on the cutting bed for a quick job.

The fiber laser has been up and running since February, with the help of Chicago Metal Fabricators Project Engineer Nick DeSoto, who also was key in bringing along the company’s older CO2 laser cutting machine and keeping it running over the years. Hauser said the performance of the laser is meeting expectations.

“What we found on our old laser was that when you get above three-quarters of an inch, a laser can cut it, but then it’s more of an issue with plate edge quality,” he said. “So when we get to that range, our high-definition plasma cutting machine is fine for most of those applications.

The CYLASER cutting head is designed to deliver high-quality cutting results on different types of metals of varying thicknesses. The Vortex feature modulates the beam power in conjunction with the assist gas flow and pressure, which leads to reduced striation and a more uniform appearance on laser-cut edges, particularly on stainless steel of 0.3125 in. or more. Vega is the name given to the cutting head’s beam mode modification feature, which adjusts the beam size for optimal cutting conditions in different scenarios.

Chicago Metal Fabricators, which processes a fair amount of aluminum and stainless steel, has moved much of that work to the new laser cutting machine. Hauser said the machine has really proven its worth when cutting thick pieces of aluminum, typically up to 0.375 in. The results have been “very good,” he said.

In recent months the fabricator has been running the new fiber laser two shifts per day and six days a week. Hauser estimated that it runs twice as fast as its older CO2 laser cutting machine. 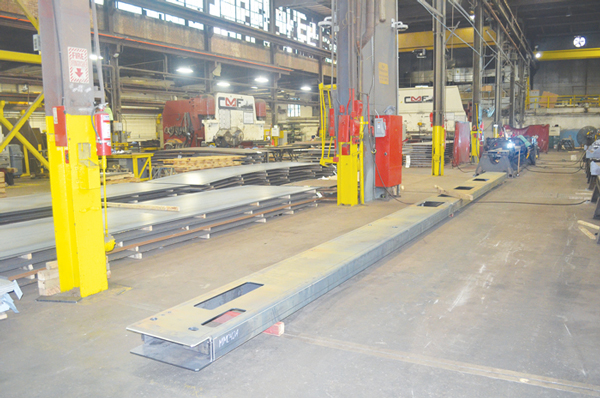 “I feel comfortable with this technology,” Hauser said. “We only have to change the lens once a year, and the maintenance is probably going to be 30 percent of what our CO2 is. Uptimes [on the new laser] couldn’t be better.”

With the performance and size of its new fiber laser cutting machine, Chicago Metal Fabricators now has new capabilities that it believes will help it to further diversify its customer base. It’s not hyperbole to say that it’s a big deal.