What you need to know about laser tube cutting 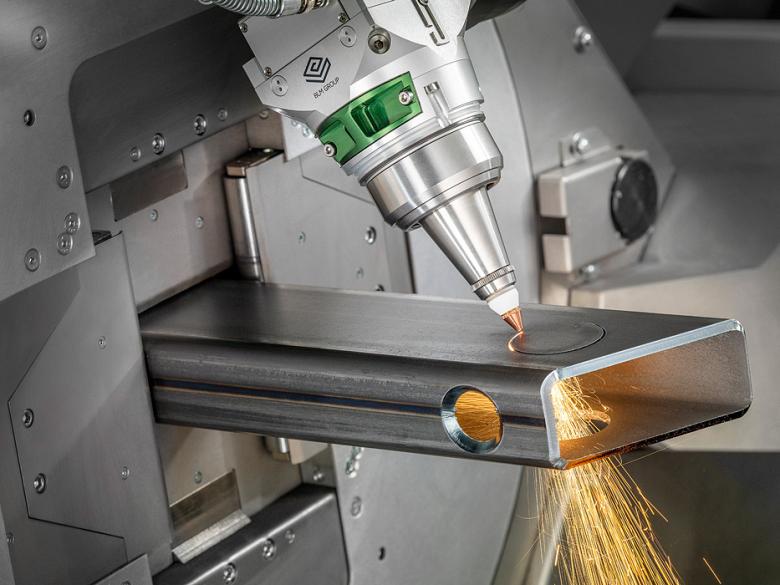 When fabricators think about fiber laser cutting technology, they might think of high-speed cutting first. That might be true, but when it comes to tube cutting, speed is relative. It’s more about the time it takes to process a tube to meet specifications than actual cutting speed on the tube. Photos courtesy of BLM Group USA Corp.

Most metal fabricators have a strong understanding of what fiber laser cutting technology has done for flat sheet processing, but just what has the fiber laser done for tube cutting? Quite a bit, actually.

Some things are quite noticeable. The laser “generator” on a fiber laser is much smaller when compared to a traditional CO2 resonator. In fact, the fiber laser is created by banks of diodes that are put together in a briefcase-size module that can range in power from 600 to 1,500 watts. Multiple modules are spliced together to create the final powered resonator, which is typically the size of a small filing cabinet. The light generated is channeled and amplified through fiber-optic cable. When the light exits the fiber-optic cable, it is the same that is was upon being generated with no loss of power or quality. It is then adjusted and focused for the type of material to be cut.

The CO2 resonator is much larger and requires more energy, as electricity is introduced to a combination of gases to produce the laser beam. Mirrors help the light gain in intensity, preparing it to exit the resonator. After exiting the resonator, the beam must travel through a path comprising several cooled mirrors until it reaches the lens. This travel causes a loss of power and quality in the laser beam.

Because of the amount of power required to create a CO2 laser, it is less efficient and has a much lower wall plug efficiency when compared to a fiber laser. It follows that the large chillers required for the CO2 lasers need more overall power too. Given the fiber laser resonator’s wall plug efficiency of more than 40 percent, you are not only using less power, but also less of your in-high-demand floor space.

Some things aren’t quite as evident until you take a closer look at a fiber laser in operation. Because its beam diameter is often one-third the size of a CO2 beam, a fiber laser has a greater power density than a CO2 laser beam. Not only does this allow the fiber to cut faster, but it also allows it to pierce faster. This smaller beam size also gives the fiber the ability to cut intricate shapes and leave sharp edges. Imagine cutting a company logo out of a tube when the spacing between the logo’s letters is 0.035 inch; a fiber can make that cut, while a CO2 laser can’t.

Fiber lasers have a wavelength of 1.06 microns, which is 10 percent smaller than that of a CO2 laser beam. With its much smaller wavelength, the fiber laser produces a beam that is much more easily absorbed by the reflective material; a CO2 laser is much more likely to reflect off the surface of these materials. Because of this, fiber laser cutting machines can cut brass, copper, and other reflective materials. It should be noted that a CO2 laser beam that reflects off the material can not only damage the machine’s cutting lens, but also the entire beam path. Using a fiber-optic cable for the beam path removes this risk.

Of course, the fiber laser doesn’t need as much attention in terms of maintenance. It doesn’t require mirror cleaning and bellows checks that a CO2 laser cutting machine needs. As long as it gets clean chiller water for cooling and the air filters are routinely replaced, the fiber laser itself is free of preventive maintenance.

Another consideration is the fiber laser’s briefcase-sized modules—they allow for redundancy. If one module has a problem, the resonator doesn’t shut down completely. The fiber laser is redundant in a way that the other modules can produce more power temporarily to support the down module until repairs can be completed—which, by the way, can be done in the field. Other times the fiber resonator can continue producing reduced power until repairs can be made. Unfortunately, if a CO2 resonator has an issue, the entire resonator is down, not just in a reduced-power mode.

At one time many thought that fiber lasers could be used only for thin materials. The CO2, with its larger wavelength, created enough kerf during the cutting of thick materials that enough space was allowed for material removal; the fiber laser couldn’t produce the same kerf or results with thicker materials. But that has been addressed in recent years with collimating technology that can produce a wider fiber laser-generated beam that creates materials separation and room for material removal in thick materials. And since the beam width is switchable, the machine can use the narrower beam to process thin materials, which allows for faster processing of different-sized materials on the same fiber laser cutting machine.

You may have noticed that we haven’t discussed cutting speed yet. It is possible to cut up to 500 inches per minute on a tube, but that’s not always realistic. In laser tube cutting, the real focus should be on how long it takes to load a tube, index it so it’s in the right position for cutting, pierce and cut it, and unload the part. It’s more about part-processing time with laser tube cutting machines, not cutting speed.

Let’s Talk About the Material

A laser cutting machine that cuts sheet metal can change out a sheet in seconds. The same can be done on a laser tube cutting machine, but it’s a whole different story as to how it’s done.

There are no standard material towers with a laser tube cutting machine. Bundle loaders, the most efficient of the tube material handling options, feed one tube at a time from the bundle into the tube laser via a singularizing system. This type of feeding mechanism doesn’t work with open profiles, such as angles or channels, because they interlock while in a bundle and don’t come free easily. For open profiles, step loaders are used, which sequence a section one at a time into the machine while keeping the correct orientation of that section.

These tubes are not small. In the U.S. standard lengths are 24 feet. Some on the West Coast typically work with 20-ft. lengths as standard sizes.

Variety is the reality of any job shop, and the same goes for those that operate a tube laser. It’s not unusual to see parts of various sizes come from one tube. The machine must be able to unload laser-cut parts that may be as small as 2 in. and as long as 15 ft., one right after the other. It also must be able to unload those parts without damaging them, which can be a challenge with softer metals such as aluminum.

The very nature of a tube prevents the need for a machine with a very high-powered laser. Whereas flat sheet laser cutting machines now are available with laser generators as powerful as 12 kW, tube laser cutting machines usually only require a maximum of 5 kW of power. With a tube, you always have to think about the opposite side of the tube you are cutting. A more powerful laser simply would blow through the other side of the tube during cutting. (Of course, if you are processing a beam or a channel on the tube laser you don’t have to worry about another side.)

Another consideration in tube cutting is the weld seam. This material is roll-formed and welded together. This brings up two points that typically must be addressed:

The positioning of the tube’s weld seam has to be taken into account for laser cutting. The weld seam must not interfere with pins or holes, and for aesthetic applications, such as furniture, the weld seams need to be hidden as much as possible. In a conventional laser tube cutting system, an optical sensor is used to scan the tube to look for the weld seam. Often tubing is covered in oil or rust, and the weld seam can be difficult to differentiate from other surface areas with contaminants. On stainless or galvanized, the weld seam may only be visible internally. That has led some manufacturers to incorporate cameras in their systems that allow the machines to not only scan the outside of the tube, but also internally as well. This allows the machine to detect that obscured weld seam and correctly position the parts in respect to it.

The weld seams also are of different compositions and cut differently than the rest of your tube. Traditionally, operators had to slow down or increase power on all operations that occurred on a tube to account for the weld seam. Today some OEMs have developed their control technology and parameters to allow the machine to single out a weld seam and adjust only those sections. This lets the machine process those parts in the fastest way. The control automatically adjusts the power, frequency, and duty cycle as the laser works its way through the tube—and its weld seam. The operator doesn’t have to create perfect parameters; he can focus on getting material in and out of the machine.

Keep in mind that there is no such thing as a perfect tube. They have bows. Weld seams can protrude not only on the exterior but also the interior of the tube. It’s a real challenge to process this material consistently and rapidly when such inconsistencies exist from one product run to another.

Imagine having to place a through-hole centered on a tube. It has to be centered to the actual dimension, not just one face of the tube. If the tube is bowed, that’s going to make things more difficult. That’s the life of tube fabricating.

How do you compensate for that? Traditionally, you are going to come down and touch the face with a sensor that marks the contact point. The tube is then rotated, and the opposite side of the tube is touched. That gives the control an idea of just how bowed the tube is. This method is accurate and can ensure those through-holes work out for the application. But keep in mind that each time a rotation of the tube occurs, the ability to deliver very high tolerances is reduced.

The other factor to keep in mind is that the traditional method of checking for bows and twists in the tube can take up to five or seven seconds before cutting commences. With the traditional means of touch sensing, you have to trade productivity for accuracy. Again, in the age of fiber laser cutting, this can seem like a lifetime, but working with tube is not as simple as working with sheet metal.

To close the time gap when it comes to tube checks, some machinery manufacturers are using cameras for these checks. They reduce the quality check to about half a second and also reduce the number of rotations that are required. This allows the machine to retain productivity as well as accuracy.

The reality is that the purchasing department is always going to pursue the less expensive option. That means the tubing that comes from the mill one week is not likely to be the same the following week. A fabricator has to learn to manage that variety. 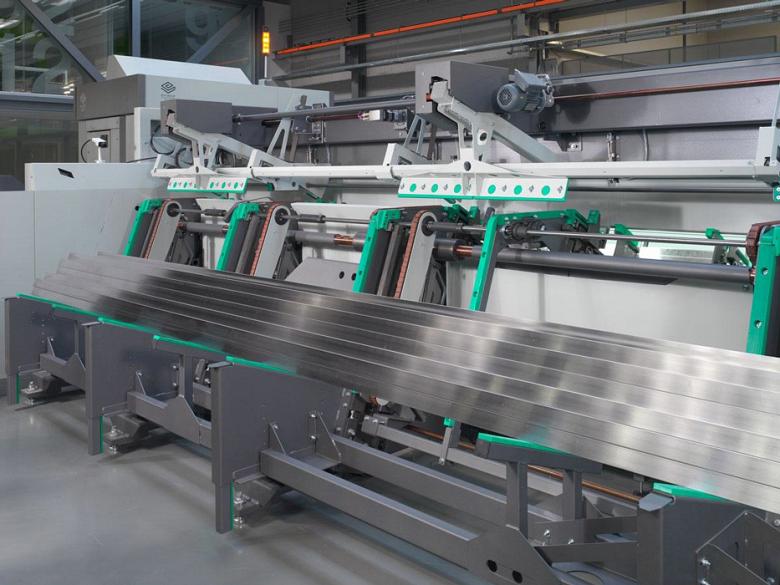 Fiber lasers are virtually maintenance-free, demonstrate superior wall plug efficiency when compared to traditional CO2laser cutting machines, can cut reflective materials, and offer precise cutting. They also are faster than CO2 machines when cutting certain metal thicknesses. However, speed is relative when it comes to cutting tube. The real time savings comes from speeding up the processing time of the tube and producing finished parts.