What high-powered fiber lasers mean for a fabricating shop 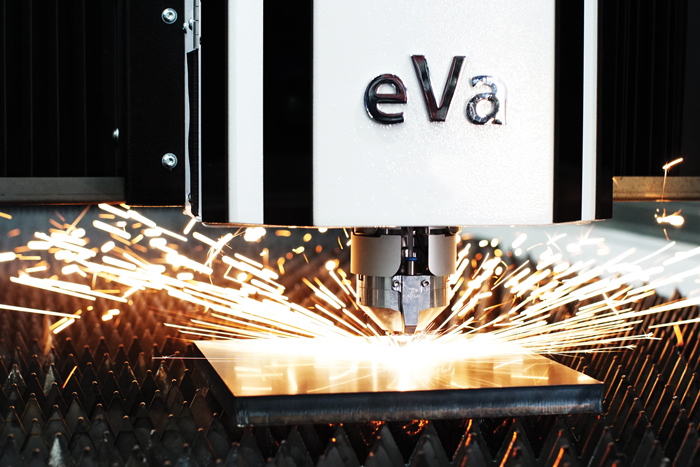 (High-powered lasers are in demand for all kinds of cutting needs, not just for thick materials.)

Those choices are available for metal fabricators today, but to focus solely on thick metal cutting with these new high-powered fiber lasers would be wrong. These 10-, 12-, and even 15-kW machines can do much more than cut thick materials, even if that may be the first thing that comes to mind for a metal fabricator when talking about these powerful machine tools. The reality is that a large majority of metal fabricating companies in North America process metal that is 0.25 in. or thinner. There’s simply not a lot of shops requiring laser cutting of very thick specialty metals for something like nuclear reactors. Those types of applications are not abundant.

The story of high-powered fiber laser technology is about decreasing process time in laser cutting. That’s why we are seeing metal fabricators buying one high-powered laser cutting machine to replace two or even three older lasers. They can get parts off the laser bed faster and cheaper than they ever could before.

A Closer Look at How We Got Here

It was only in the mid-2000s when high-powered CO2 laser cutting machines were deemed the tool necessary to process the plate quickly and efficiently for the creation of armor kits for U.S. troop vehicles deployed in Afghanistan and Iraq. Improvised explosive devices were a huge threat, and the kits protected military personnel in a way that the bare transport vehicles couldn’t.

Only a few years later fiber laser technology debuted, and its adoption rate exploded by the middle of this decade. Without the need to worry about mirror or lens cleaning, bellow checks, and beam alignments, fabricators found a new cutting tool that required little maintenance and that cost about half of what a CO2 system cost to run.

The fiber laser also produces a beam wavelength that is about 10 times shorter than the 10-micron beam wavelength associated with a CO2 resonator. This focused beam produces a higher power density that, when coupled with the technology’s higher absorption rate, translates into cutting speed that greatly outpaces that of a CO2 laser, particularly in material thicknesses less than 0.25 in.

With fiber laser technology manufacturers can increase the power of these machine tools with the addition of laser-producing modules. (In the modules, light emitted from semiconductor diodes are excited in ytterbium-doped fiber optics until the laser is produced; all of the modules are spliced to an active fiber, which is then used to deliver the laser beam.) That’s why the recent rise in wattages has occurred so quickly: From a pure technology point of view, adding power is not complex. In fact, fiber laser welding systems today can exceed 100 kW in some instances.

The reason that fabricators don’t have 100-kW systems on their shop floors is that the beam delivery systems just can’t handle that much power. That’s why so much research is being done in cutting head design. Each laser cutting system manufacturer is looking to produce a reliable cutting head that can deliver the fiber laser beam for an extended amount of time in the face of harsh cutting conditions, which is more than likely to occur when cutting thick materials.

In recent years those same machine tool manufacturers have developed cutting head optics that can modulate the beam size during cutting. This technology development has propelled fiber laser cutting machines from being strictly a tool for cutting thin sheet metal. As material gets thicker, a wider beam is needed to create more kerf so that molten metal can be removed.

Here are some general rules for cutting common metal such as steel, stainless steel, or aluminum with nitrogen:

Keep in mind that a fabricator with a high-powered machine can produce more parts per hour and the part cost plummets as the power goes up. But this occurs only if the laser cutting machine is quick enough to maximize the power of the machine.

What Is Meant By Quick?

Operating costs probably will go up as the power level on a fiber laser cutting machine goes up. Generally, doubling the power increases laser operating costs by 20 to 30 percent. That’s why it’s so important that the fiber laser is operating at peak efficiencies, so that part cycle time can be decreased to offset the higher operating costs. By decreasing cycle time, a fabricator can reduce the impact of variable and fixed costs and increase profitability.

Luckily, fiber lasers cut fast. Just watch them race up and down a piece of sheet metal at a tradeshow. Unfortunately, most fabricators aren’t cutting parts that feature long and straight lines. They are cutting small holes and unique geometric shapes. In this reality a fabricator needs fast acceleration to take advantage of the machine’s linear speeds.

For instance, a 1G machine that accelerates at 32.2 feet per second squared is easily outperformed by a 2G machine, which accelerates at twice the rate. When the Gs are doubled, the machine needs half the time and half the distance to reach the same programmed speed.

The rate the machine can decelerate into and accelerate out of corners and tight arcs often has a greater impact on cycle time than laser power or maximum machine speed. Acceleration is vital.

For further illustration, consider laser cutting 20-gauge aluminum with a 4-kW laser that can cut at a speed of around 2,250 inches per minute. If the fabricator is cutting a 3-in. line with a 1G machine, that 4-kW laser will never accelerate to the potential cut speed before it has to start decelerating. Meanwhile, a 6G machine will be at the cutting speed for 2.4 in. of the 3-in. line.

Making the Most of Material Exchange

Of course, processing time on a fiber laser cutting machine is greatly tied to the system’s ability to load sheets or plate and unload cut parts and skeletons. A fabricator is not going to gain any cycle time advantage if it has to wait several minutes for material movement to take place.

A lot of pallet changers offered today were designed to work with CO2 lasers, which cut at much slower rates when compared to fiber lasers. They most likely use hydraulics and can take 35 to 50 seconds to exchange a sheet.

The most modern pallet changers rely on servo-driven technology and can swap a pallet in under 10 seconds. If a fabricating operation typically changes sheets six to 10 times an hour, a modern pallet changer can add one to two hours of cut time per week that might otherwise be unavailable with slower material handling technology.

This automation of loading and unloading is critical. A fabricator that can cut and get that sheet or plate off and replaced in seconds is getting maximum production out of its fiber laser cutting machine. A fabricator that is able to cut faster, but still experiences downtime related to slow material handling, is pushing the laser for no reason.

When it comes to selecting pallet changer technology, a fabricator should select one that can handle the thickest, heaviest material it processes. A 1-in., 5- by 10-ft. plate weighs 2,100 lbs. For most shops, a pallet changer with a 2,200-lb. capacity should be sufficient. Anything over that thickness requires a heavy-duty system designed to manage the much heavier loads.

High-powered Lasers for All?

Not all metal fabricators need a high-powered laser, particularly if it doesn’t have enough work to load its current laser cutting machine. For example, if the shop’s laser cutting work load is not expected to grow and consumes just half of a work shift, then paying for a more powerful laser to reduce the work load to a quarter of a shift likely won’t deliver a good return on investment.

But if metal fabricators are maximizing their current laser cutting capacity and looking to possibly add another shift, they definitely should take a look at high-powered lasers. This is particularly true if they are using older laser technology.

Today’s high-powered fiber laser cutting machines can replace two or three older lasers. In a time when fabricators struggle to find reliable and experienced operators, they can actually invest in a fast and efficient laser and reduce the number of laser operators needed, deploying them to other important jobs in the shop.

Fiber laser cutting machines will continue to grow in power if the cutting head and material handling technology can complement the increased power. Fabricators will take advantage of the power if they are able to feed these ravenous cutting machines. Thick or thin material, it doesn’t matter.