Support structures are a necessary downside to additive manufacturing (AM) processes because they increase both material costs and postprocessing requirements. So a technology that promises to reduce the need to support printed features should have, well, plenty of support.

Most metal printers limit the angle of an unsupported overhanging feature—that is, the angle between the feature’s surface and the horizontal plane—to around 45 degrees. The supports required by lower-angle overhangs must be removed in an often laborious postprinting process.

Sapphire, however, can print unsupported overhangs with angles of less than 10 degrees, Velo3D claims. One reason is the way Sapphire puts down powder layers.

During the printing of low-angle features, parts tend to come in contact with the recoater, which spreads powder layers on the part surface. Greg Brown, Velo3D’s vice president of process engineering, explained that this unwanted contact can cause part defects.

So Velo3D equipped Sapphire with a noncontact recoating system. It snowfalls powder onto the print bed; then, as with other recoaters, it planarizes the powder with a blade. But unlike conventional AM printers with recoaters that operate like snowplows, Sapphire’s blade does its work without contacting the part.

Though important, Sapphire’s noncontact recoater alone isn’t enough to allow printing of unsupported low-angle features. Something also must be done about the large amount of residual stress built into multilayer printed parts, which causes low-angle structures to warp upward.

Sapphire tackles this problem with its preprint software, which breaks part layers into different regions. 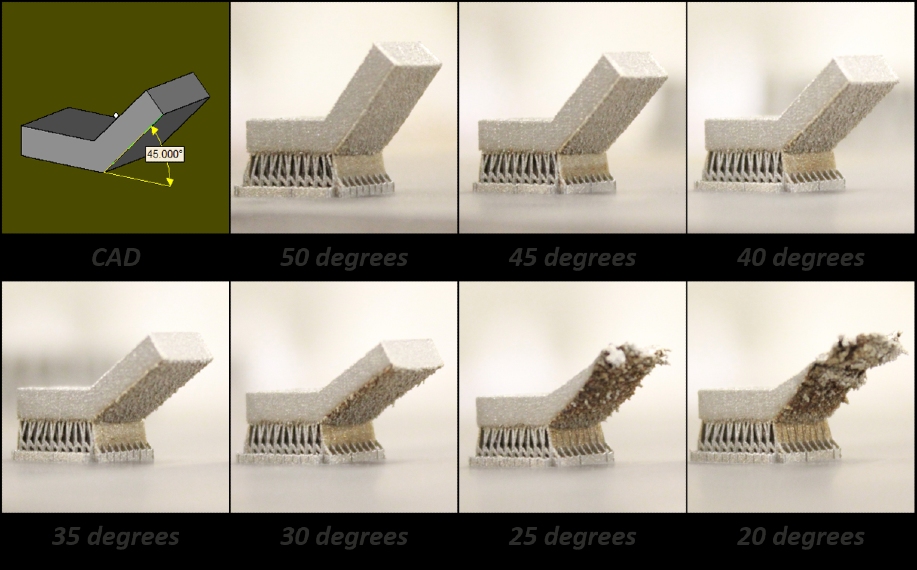 According to Brown, Sapphire’s capabilities allow it to produce parts that normally would be considered impossible to additively manufacture.

One example is shrouded impellers, which have low-angle fluid passages that require a high-quality surface finish. Supports for these enclosed features can be nearly impossible to remove.

“If you can’t access these surfaces from the outside, you can’t machine them after AM,” Brown noted. “But unlike conventional additive systems, our system can print these parts with very high quality.”

Even if it is possible to print certain parts using conventional AM systems, the additional outlay for material, printing time, and postprocessing to build the supports can exceed the cost of printing the part, Brown said. In such cases, 3D printing can become cost-prohibitive.

Because Sapphire “can print these parts with much fewer supports, it brings the cost down while also bringing the part quality up,” he said.

Other parts with normally problematic overhangs include tubes. If a tube is laid lengthwise on a horizontal surface, there will be low-angle overhangs near the top of the circular opening. To use a conventional AM system to print a tube larger than 6 millimeters in diameter with that orientation would require the overhangs to be supported. And even in cases where the diameter is less than 6 mm, said Brown, the top surface often is highly defective if there are no support structures. That makes conventional AM systems impractical for fluid-flow channels unless a postprocess finishing step is used.

By contrast, Brown said, Sapphire can print tubes with diameters up to 40 mm in diameter without supports on their inner surfaces. Moreover, he added, “the surface finish on those tubes is consistent and of high quality all the way around, so they can be used for fluid applications without any refinishing.”

Heat exchangers are another type of device suited to Sapphire’s capabilities. Unlike conventional AM systems, which can only produce relatively thick heat exchanger walls, Sapphire routinely builds walls with thicknesses down to 200 microns, which helps maximize heat exchanger efficiency, Brown said.

In addition, he said there are no restrictions on the wall aspect ratios that Sapphire can handle. Conventional printing systems struggle when aspect ratios reach about 8-to-1.

Today Sapphire is helping aerospace firms—particularly those involved in what Brown called “the new space race”—manufacture complex designs. The system also is being used by the oil and gas industry.

Though Brown thinks more supports can eventually be removed from printed structures than what Sapphire currently allows, he doesn’t think the number will ever reach zero.

“In some cases, supports are the correct answer to a technical problem,” he said. “It’s just that in most cases, they are not.”